This Getting Started guide will show you how to quickly download, build, and run IoTivity apps, featuring two-way communication between a Linux or Android device and a Raspberry Pi with an add-in Pimoroni board. This simple platform enables you to quickly prototype the capabilities of your planned smart device on real hardware:

The two apps talk to each other over Wi-Fi, using the OCF (Open Connectivity Foundation) protocol. 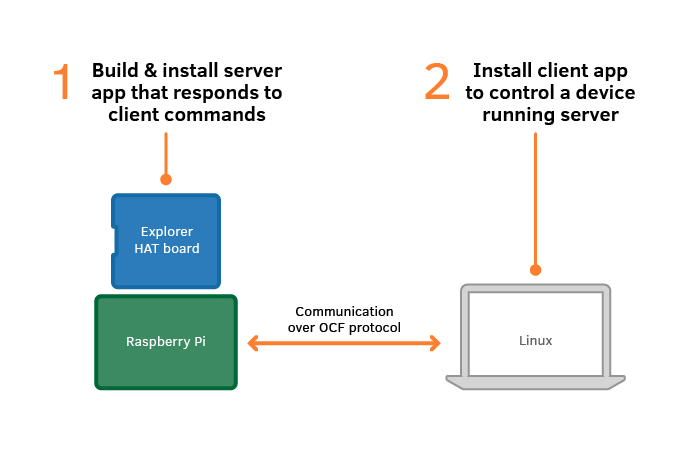 The first two listed items are sold together as a kit here. (scroll down, below "Development Resources and Solutions").

Set up the Raspberry Pi

Connect to the Raspberry Pi

Build and Run the Server App

Build and Run the Client App (If you've already installed OTGC once, you can skip the installation here and jump to step 3.)

NOTE: The instructions below are for building and running the OTGC client application on Linux. Alternatively, you can run the Android version of OTGC on your smart phone or tablet. Get the installation package here. You can then just run it and skip the Linux OTGC installation in the steps below. If you run the Android app, you can basically follow the instructions from step 5 below. The circle icon will start the discovery process and should find the Emulator server.

The sample client application is called OTGC (Onboarding Tool and Generic Client). You'll download and build the binary with a script:

Digging deeper: Next steps for development

Now that you've created a device simulation based on IoTivity, you're ready to dig deeper to explore other platforms and learn how to apply IoTivity to your own platform and devices.