This guide provides a brief introduction to the use of container images that provide various examples of applications built with IoTivity-Lite. These images include:

Note that these containers are prototypes for demonstration purposes.

The remainder of this guide assumes the use of Docker and docker-compose. The images described in this guide are Linux-based, but their primary functionalities should be consistent on any platform that can run Docker.

You should be familiar with basic docker and docker-compose commands. But no special configuration of the Docker runtime should be required unless explicitly stated. More advanced examples may utilize volumes and/or bind mounts.

The fastest way to try out an example OCF domain where example Devices built with IoTivity-Lite can be discovered, onboarded, and configured to interoperate is with the ocfadmin/iotivity-examples examples image.

The following docker-compose file can be used to quickly spin up a full example:

This file can also be downloaded from GitHub.

This file defines instances of the three example IoTivity-Lite applications that the examples image comes with - simpleserver, simpleclient, and onboarding_tool. These each represent OCF Devices, and can interact together.

simpleserver acts as a lamp and simpleclient controls the lamp.

This example can be run with the following commands, assuming that the compose file (docker-compose.yml) is present in the current working directory. Note that, if you haven’t yet pulled the ocfadmin/iotivity-examples image, that docker-compose will pull it for you.

At this point, you should see some minimal output from the simpleserver and simpleclient logs, and the OBT’s main menu should appear on screen. An example of what this might look like appears below. 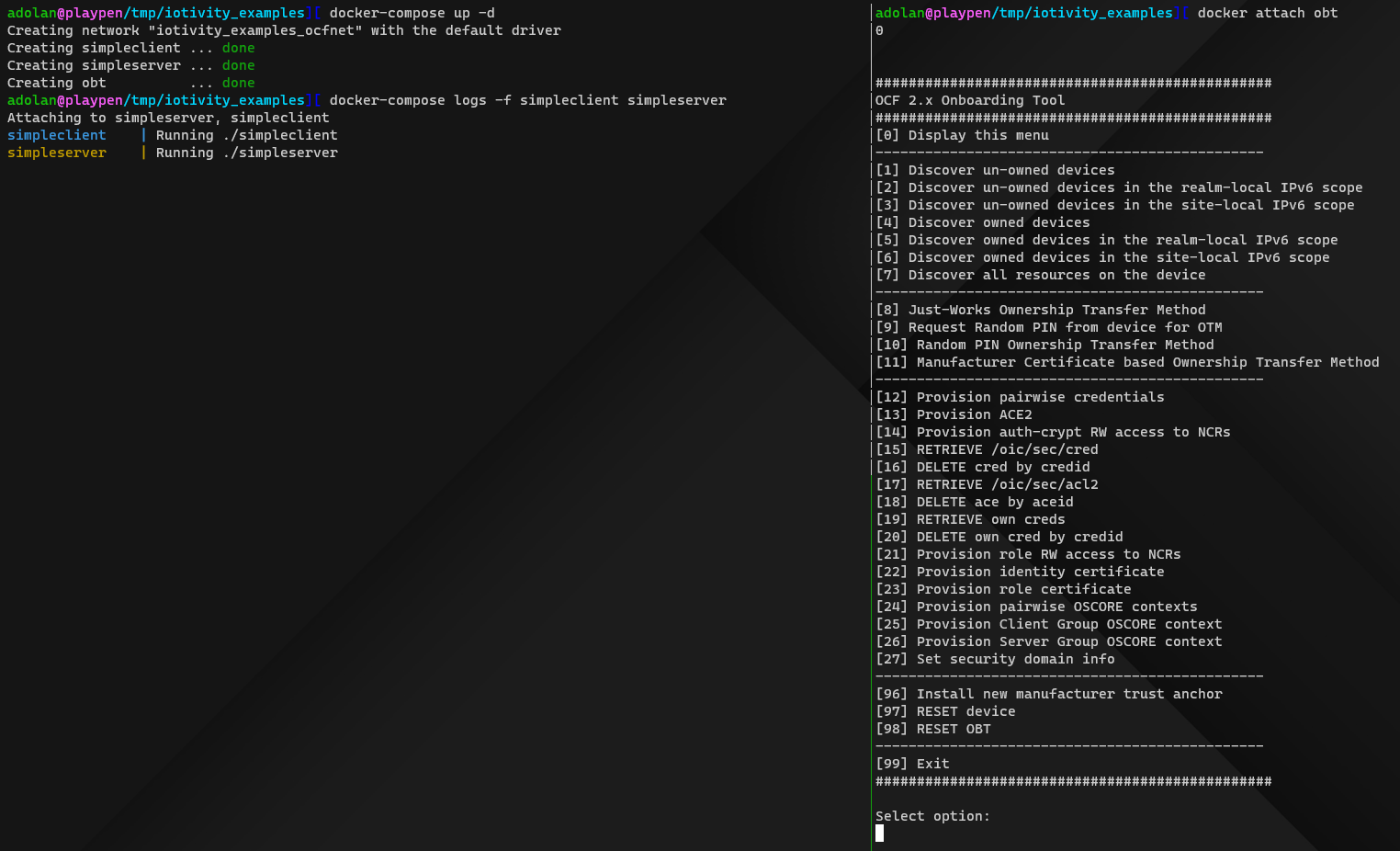 From here, the OBT can be used to discover, onboard, and configure the simpleserver and simpleclient Devices.

This can be done by following these steps (entered into the OBT):

With both Devices onboarded, we can now use the OBT to provision credentials and access control lists (ACLs/ACEs) to allow them to interoperate with each other.

The following steps can be used to perform this provisioning: 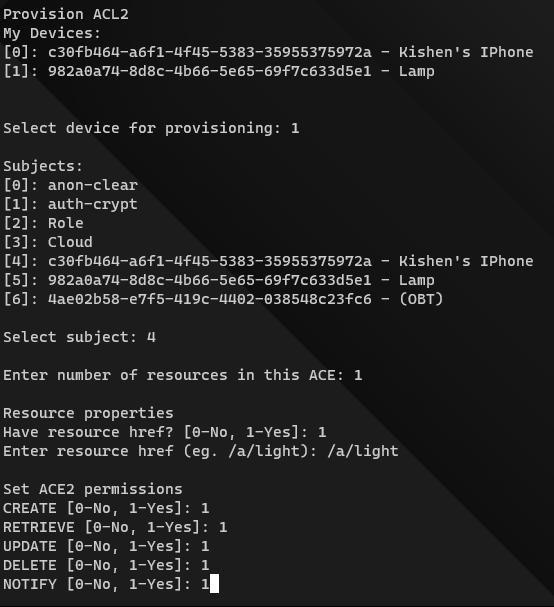 Enter “99” to exit the OBT, and ensure that your other terminal is still following the logs from docker-compose (docker-compose logs -f simpleserver simpleclient).

Use docker restart simpleclient to restart the simpleclient Device. Observe the logs in your other terminal to see that the phone/controller Device is able to update the state of the Lamp Device and observe its state changes! 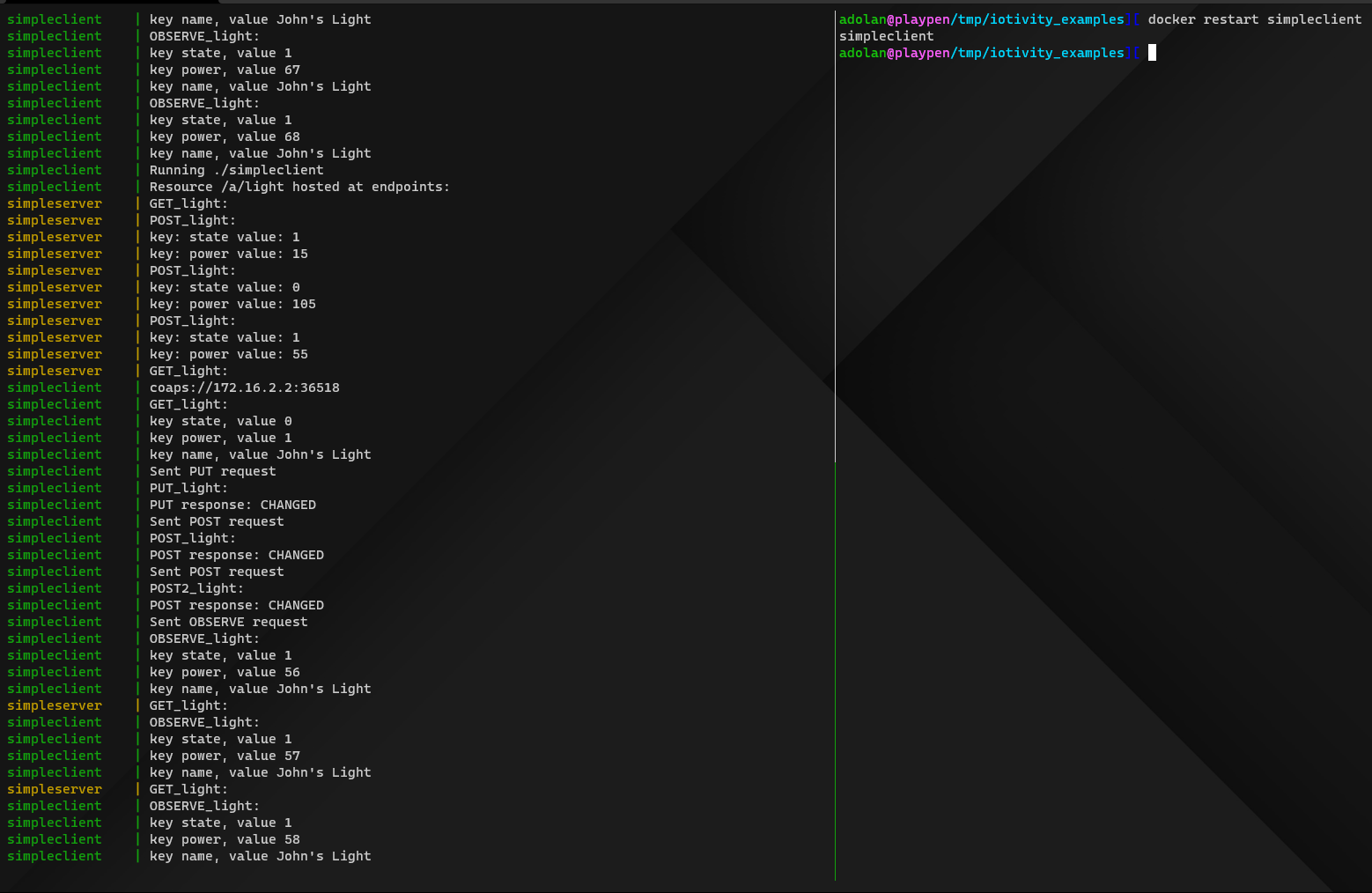 The ocfadmin/iotivity-examples image can also be instantiated individually. Each of the applications that come with the image can be started with the following commands. Each invocation specifies the -i and -t flags to ensure that output (and input, in the case of the OBT) is properly captured.

The OCF DeviceBuilder tool can be used to generate stubs of IoTivity-Lite application code. The ocfadmin/devicebuilder image enables the use of this tool without the need to install and configure it. Refer to the DeviceBuilder documentation for details on how DeviceBuilder can be used.

The DeviceBuilder image is generally used with the following command:

This image requires the use of either volumes or bind mounts, to allow the container process to access the input JSON file.

Generated code is produced in a directory named output, which is created in a location relative to the volume or bind mount.

In this example, assume that the following JSON file is located in the current working directory and named speaker_model.json:

The DeviceBuilder image can be used to generate IoTivity-Lite application code with the following command:

This command specifies the following:

The result of running this command is a new directory named output being created in the working directory. This directory includes generated source code that can be compiled with IoTivity-Lite, as well as schema files. An example of the structure of this output directory appears below.

This guide will demonstrate how to use the image to create a simple development environment shell that can be used to compile and run the existing IoTivity-Lite example applications. For more advanced examples for the use of the image, refer to the documentation and guides on GitHub.

To execute an interactive shell from which IoTivity-Lite applications can be complied, use the following command:

This will open a shell in the container’s working directory of /iotivity-lite/port/linux, inside which the default example applications that come with IoTivity-Lite can be compiled and run.

For example, the following commands (run inside the container) can be used to build the simpleserver example application with debug logging enabled:

Once the applications have been compiled, their executables can be run directly within the container: